UK delivery £4 - most orders delivered within a week.

Do you remember in my last house update, all the way back in June, me saying that there probably wouldn't be another update for six weeks or so, and that we'd probably be getting ready to move in by then? Well that didn't happen. It's exactly five months since we got the keys to the house and (a) the work still isn't done and (b) we haven't moved in.

There's a number of reasons for this, primarily that as the house was stripped back to its bones we uncovered more and more things that needed fixing. Plus as work was ongoing, either the builders suggested changes we might want to make (that we generally did) or we changed our minds about things, which invariably causes a delay. What that does mean though, is that five months on, even if it's not where we thought it would be, the house is looking VERY different. We've had to replace the electrics and the plumbing and in some rooms even the floor. There was quite a while when the kitchen had neither floor nor ceiling! 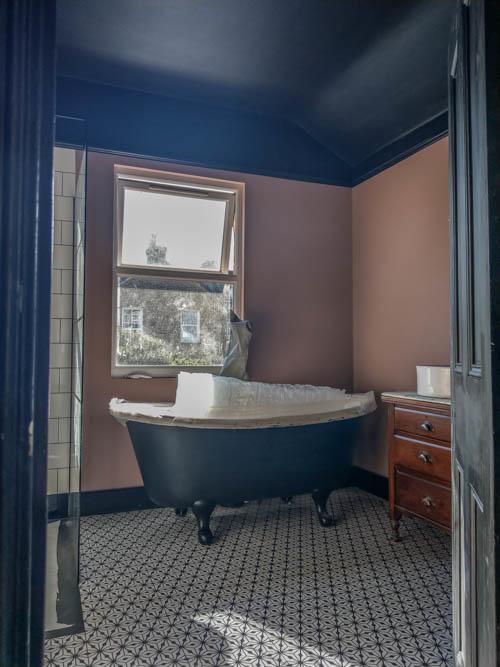 We are getting there though. The bathroom is virtually done, we're just waiting for the lighting to go in and a mirror to go up. The main bedroom is finished, just carpets and built in wardrobes need to be added (which we'll do later anyway) and the living room is almost there (once I decide what shade of green is the right shade of green). We expect to move in in two weeks, and have a functional kitchen a few weeks after that.

I'll do a proper post on each room as they get finished, most likely starting with the bathroom, since that will be first to be completed, but for now, here's a sneak peak of how each room is looking! 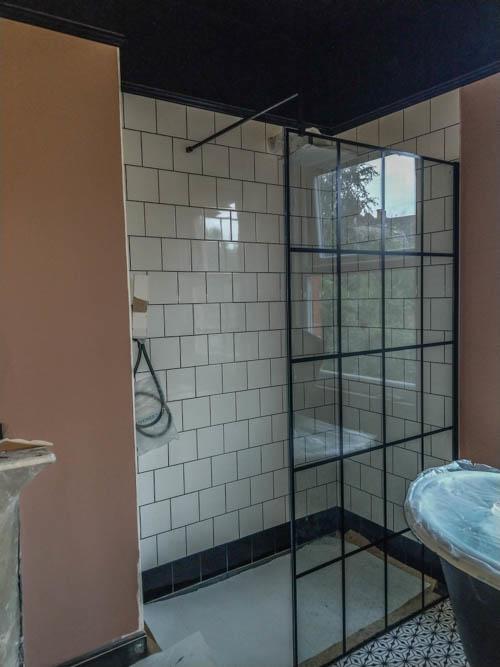 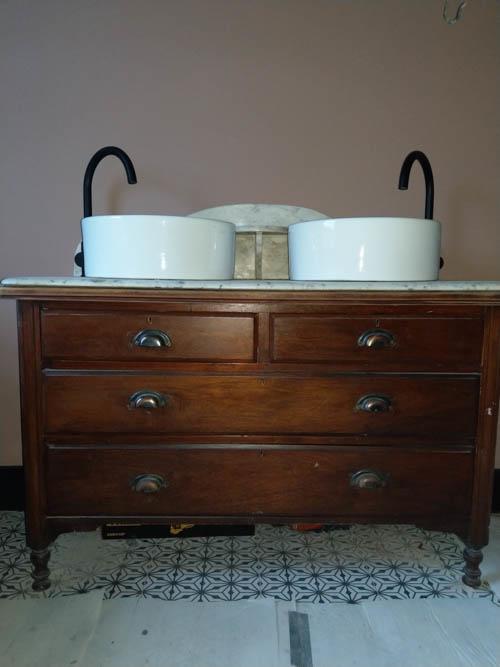 I had originally planned on either a black and white monochrome scheme or a green and black design in the bathroom. But, when we decided to change the location from the original tiny room it was in to the larger third bedroom next door, I decided it needed something a bit more dramatic and glamorous. So we've gone for Farrow & Ball's gorgeous sulking room pink on the walls, with a pitch black ceiling and woodwork. I've kept the industrial touches that I had in my previous bathroom, including using a vintage piece as the vanity unit (which I'm over the moon with!). 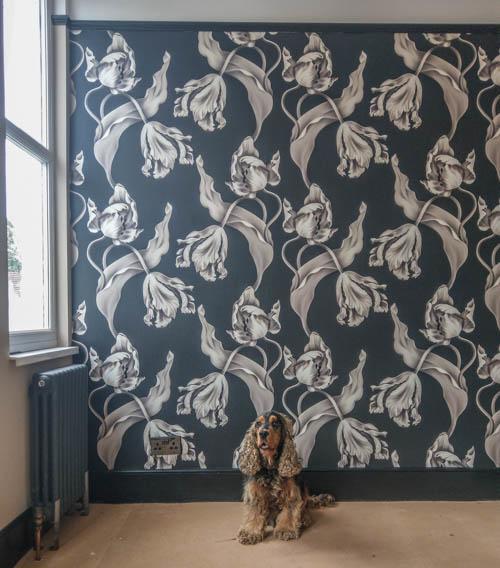 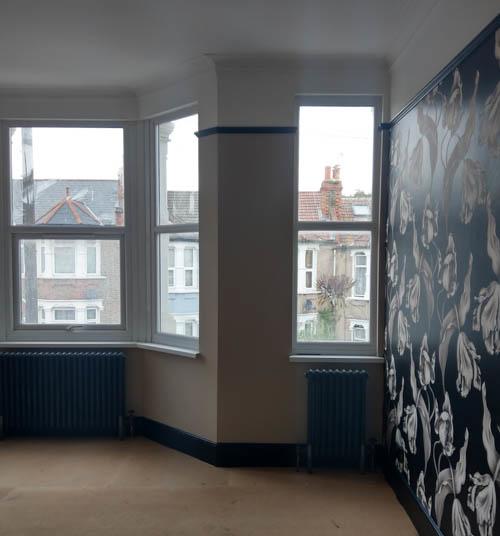 I mentioned in my previous post about botanical wallpaper that I was planning on using a design by Ellie Cashman and that's exactly what I have done. Twisting Tulips is my favourite of all her designs (although they're all lovely) and it works perfectly in this room along with the black woodwork and taupe walls.

We've decided not to worry too much about bedroom number two yet, so there we've just kept the walls white and painted the woodwork black as with the rest of the house. It's most likely we'll use this room for storage initially, whilst work continues with the rest of the house, but monochrome will be a nice backdrop for whatever we do decide to do to this room when the time is right. 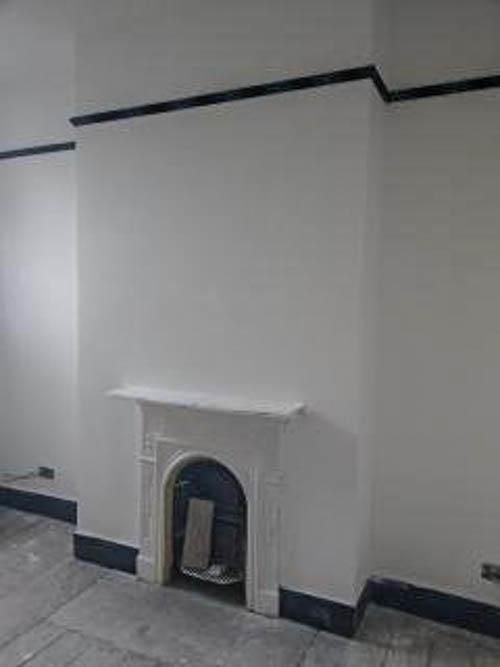 Finally, (with the rest of the house still resembling a building site) the living room has come on leaps and bounds. We've had the gorgeous cornicing (one of the reasons we bought the house - along with the high ceilings in every room) mended where there was a gap from the wooden fireplace and we've reinstalled picture rails and ceiling rose in here. Along with the beautiful original mantlepiece that was hidden behind the old wooden fireplace, this room is fast becoming my favourite. We just need to sand the floorboards and paint the walls (an as yet undecided shade of) green and then this room will also be ready to move into. 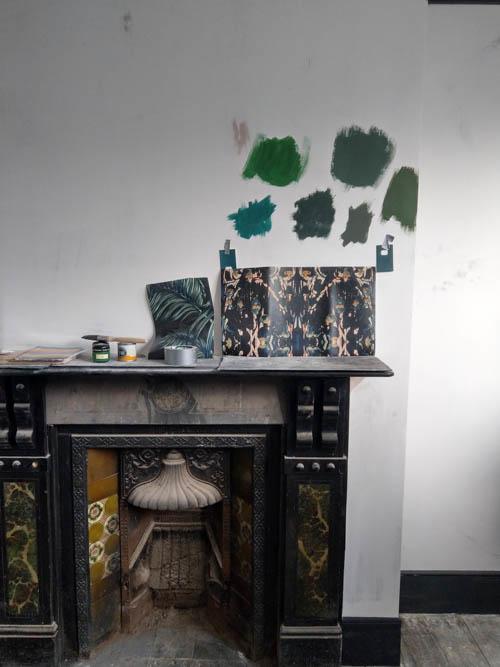 After a few very slow weeks where it felt like not much was happening, we've reached another exciting stage where rooms are getting to the finished (or at least almost finished) stage, and hopefully I'll be back at the end of next month to tell you about our kitchen, dining room and laundry room. Exciting!