UK delivery £4 - most orders delivered within a week.

Okay, so it's not quite six weeks. But a lot has happened over the past five and a half weeks since we got the keys to the new house, and I'm realising quite what a project this is going to be! 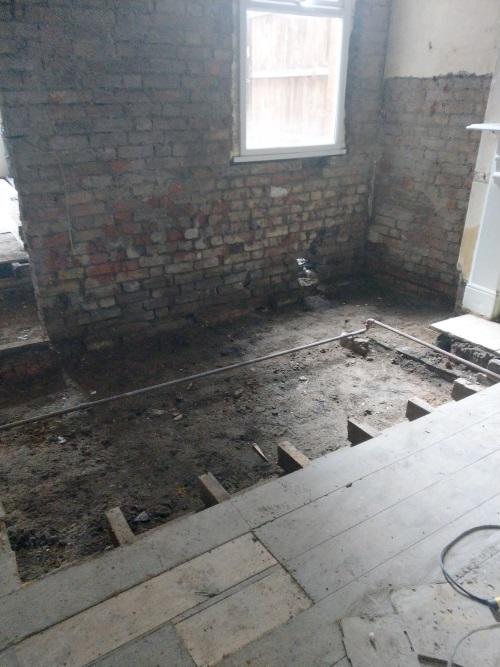 Three weeks in we instructed a local building company to take on the work, and they've now been there just over two weeks. It's been amazing to see quite how quickly a house can be taken apart in such a short space of time. Whereas before we had an admittedly tired house, which was in need of some work, we now have some brick walls, and only partial floors! We're needing to completely rewire the electrics and redo the ancient plumbing, so the house has been taken back to its bones. There was also a lot of damp in the ground floor - nothing serious, just years of bad decisions and neglect, so we're currently trying to dry that out, now the drainage has been cleared and concrete covering the air bricks has been removed. 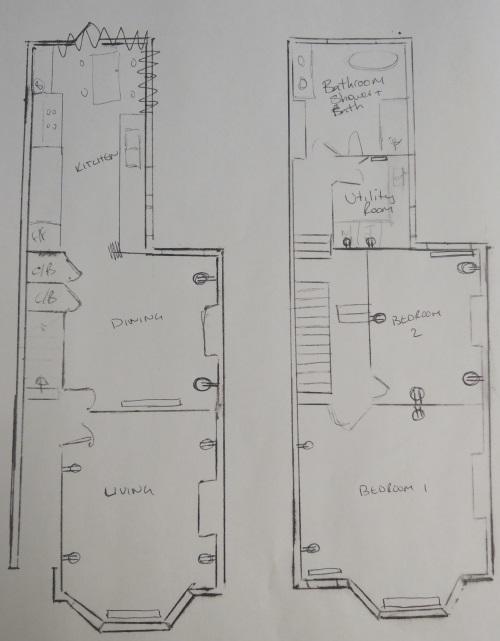 Our builders have been great at coming up with ideas/telling us what neighbouring properties are like, so we do now have a firm idea of the layout of the house. We've decided against a side return - a big open plan kitchen/dining room would have looked really amazing, but it's just so much money for not a huge amount of extra space when the existing kitchen is already a decent size. Instead we're going to partially knock through the wall between the kitchen and dining room to make an L shaped room, and swap the window for french doors to increase the light.

Having decided all this, I've made some changed to how the kitchen will look. It will still be an industrial monochrome kitchen, but I want to make the kitchen and dining room flow cohesively, while still feeling like two separate rooms, so I'll be bringing some black into the dining room and pink into the kitchen. 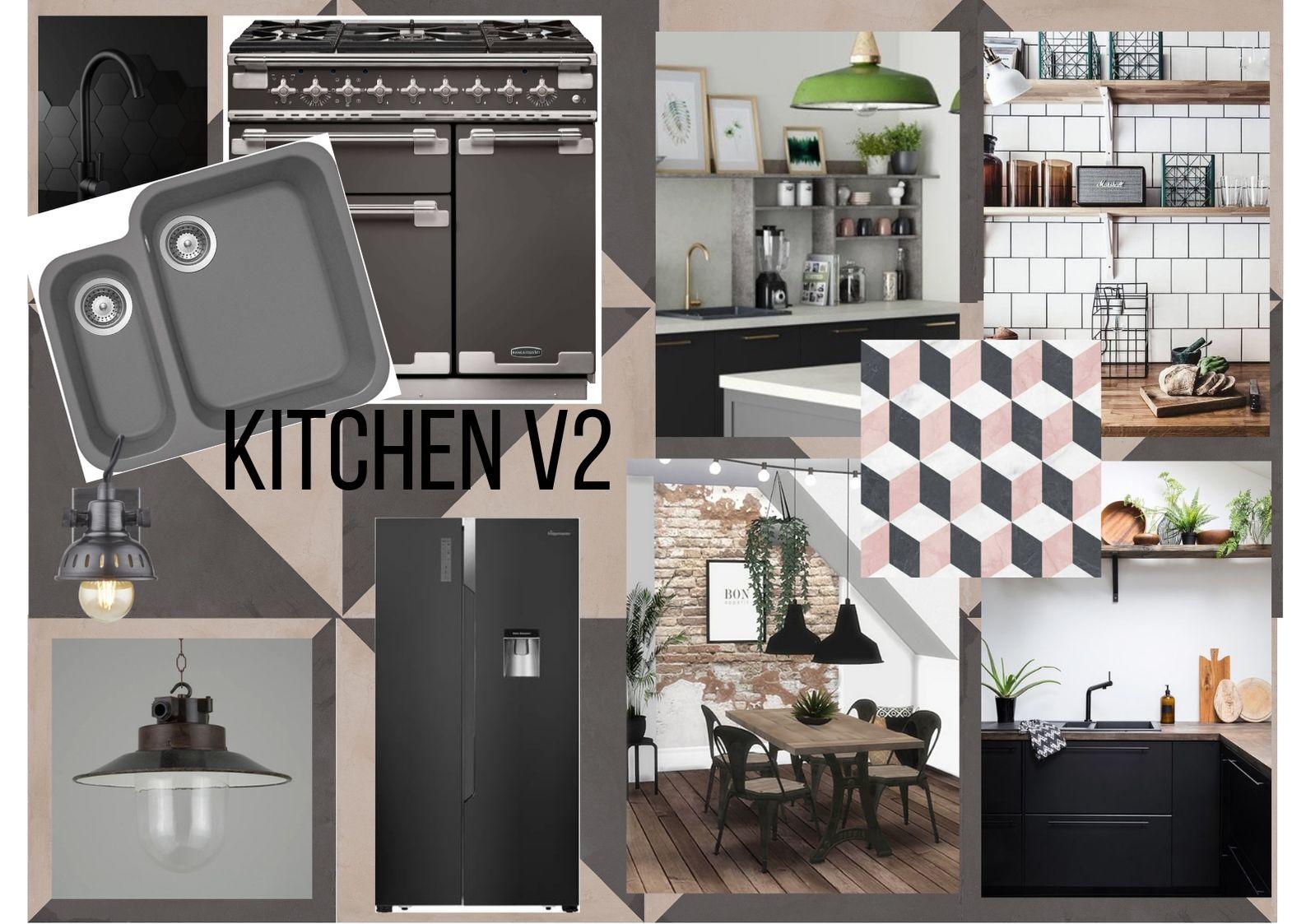 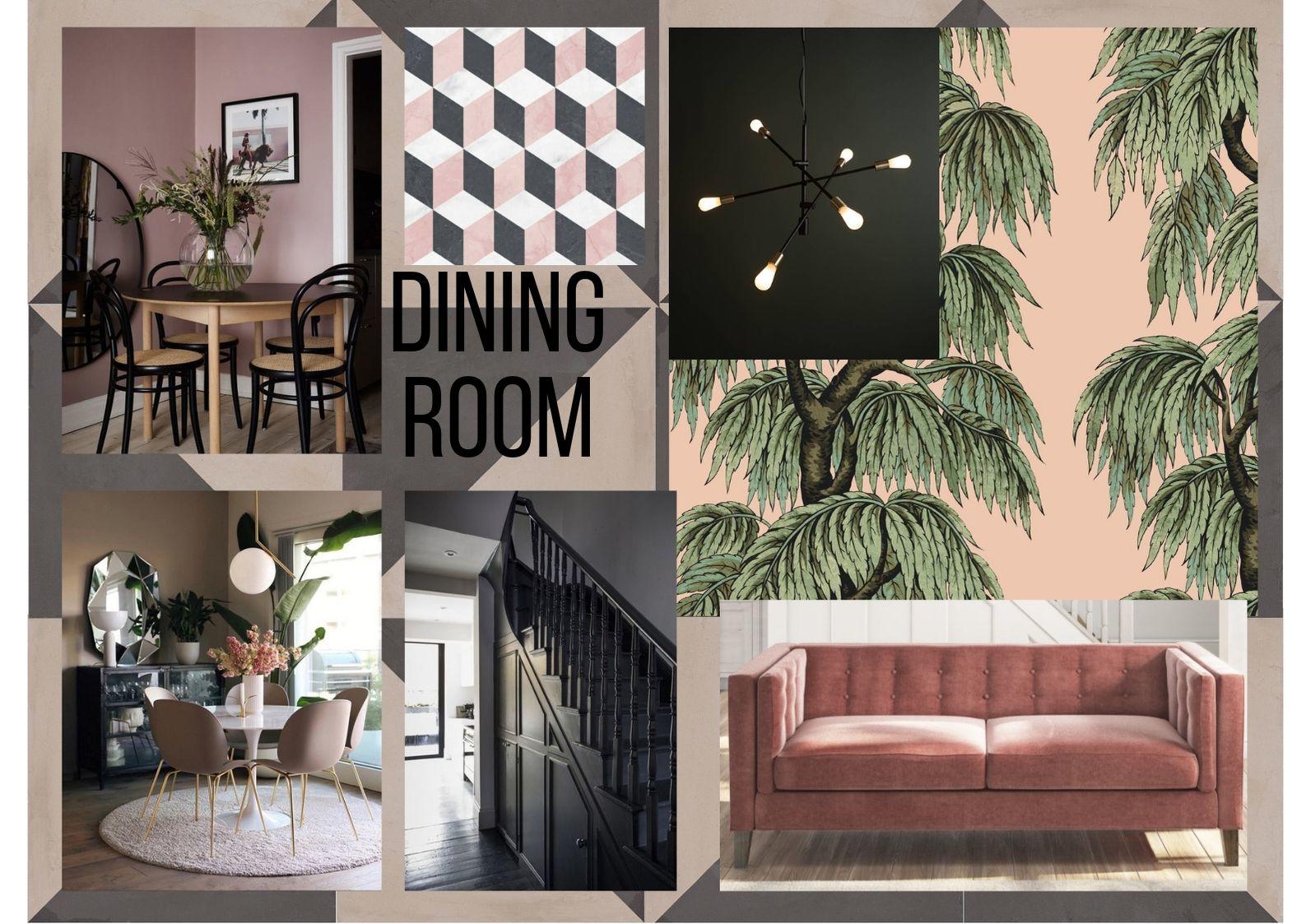 Upstairs we're going to move the bathroom from the teeny tiny room it's in currently, into the third bedroom (which has a fireplace!) where there is space for a free standing bath and large shower. The bathroom will become a laundry room. Then we will add two more bedrooms and a small bathroom in the loft. This will all end up being a similar cost to a side return but will give us bags more space, and more useful space at that. The top floor will basically become office space/guest suite, which will be much more useful to us than a huge kitchen, since we both often need to work at home, and neither of our families are in London, so they visit often.

Moving the bathroom has totally changed how I plan to decorate it. The larger space, and the fact that we can have a roll top bath and the fireplace has meant the room will be much prettier than I was planning when I thought we were designing a small bathroom. We're also going with a Crittal style shower screen and mirror, black taps and shower and black ceiling though, so it will be pretty but also industrial, if that's such a thing. 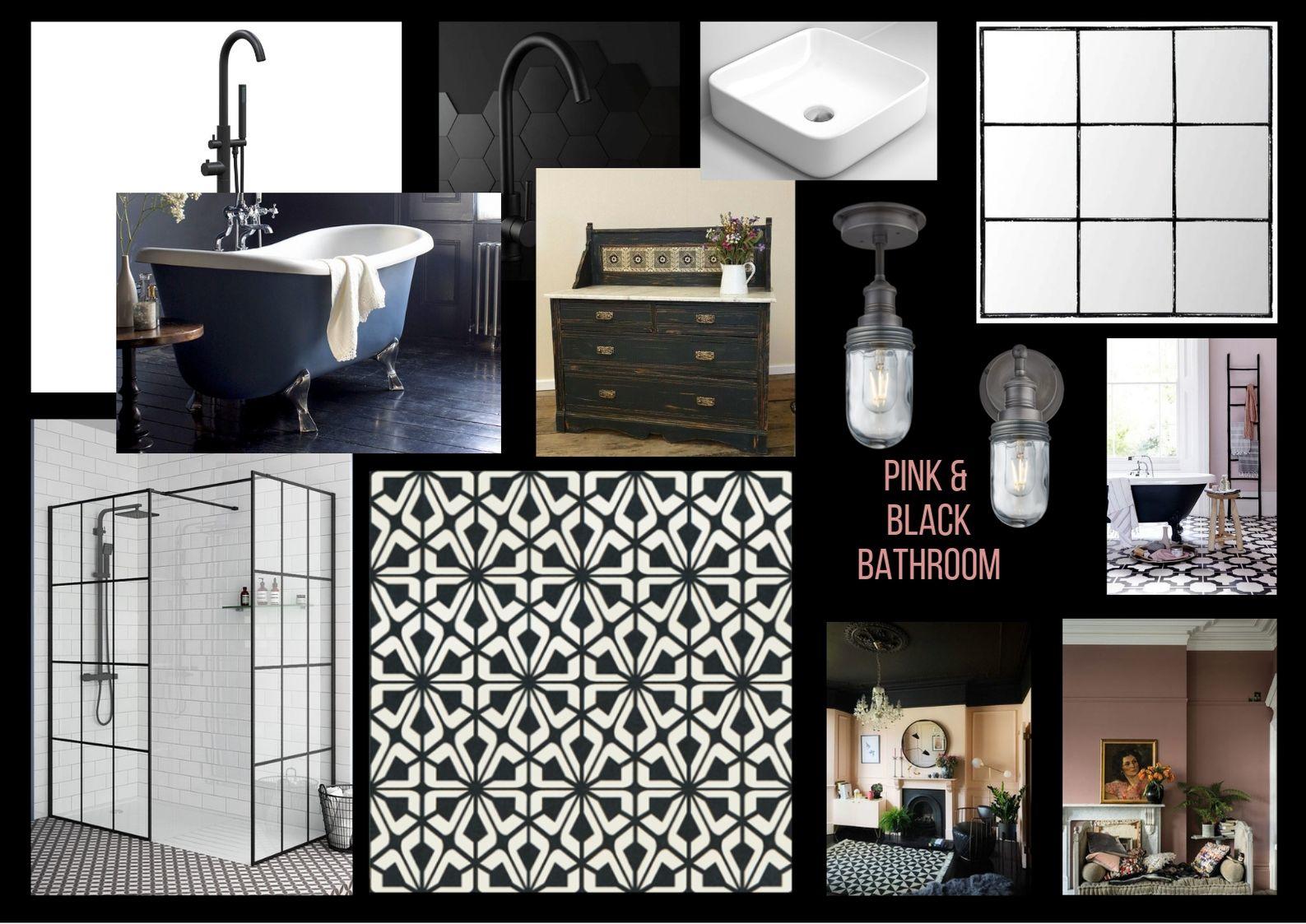 The most exciting thing to have happened though, was the removal of the awful 70s wooden fireplace. I showed you that in the last blog post, but here it is again for all your pleasure: 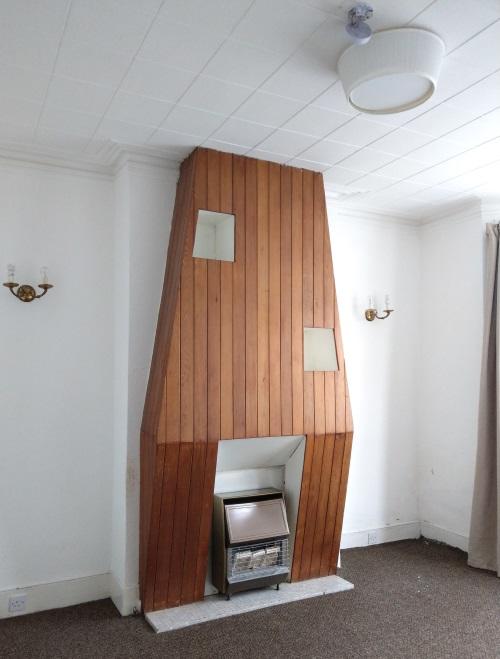 You'll never guess what was hiding behind it (unless you follow us on Instagram. Then you might have see this, since it went a bit viral). Yep, my wish that the original Victorian fireplace might still be hiding behind here, not only came true but actually exceeded my wildest expectations. Just look at it! This beauty has been hiding behind it since (we think) 1968 (which is the date of the newspaper used as lining underneath some of the shocking lino which was underneath the hideous brown carpet in EVERY room. Presumably that was done the same time as the fireplace). It really does beggar belief! 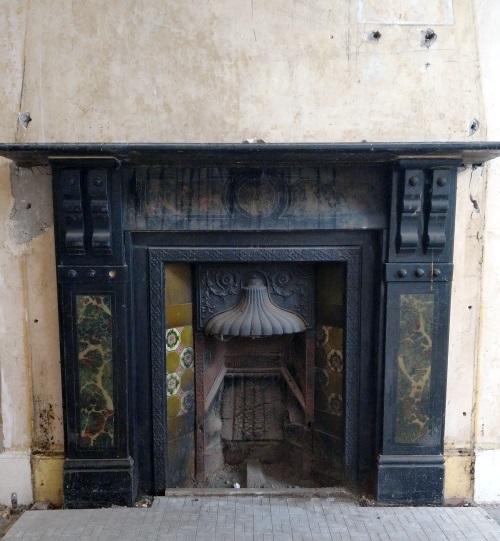 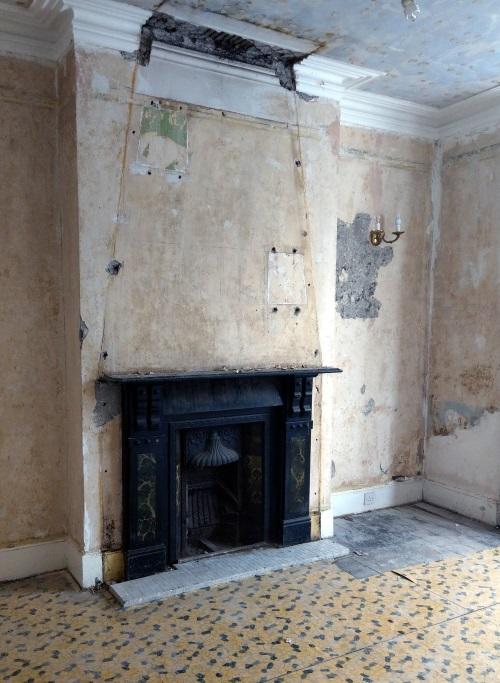 I'd been toying with having this room dark green, and the green on this fireplace has certainly cemented the idea that there definitely needs to be some green in here. Whether that's green walls, or dark grey walls and green sofa/accessories, I'm still undecided about. 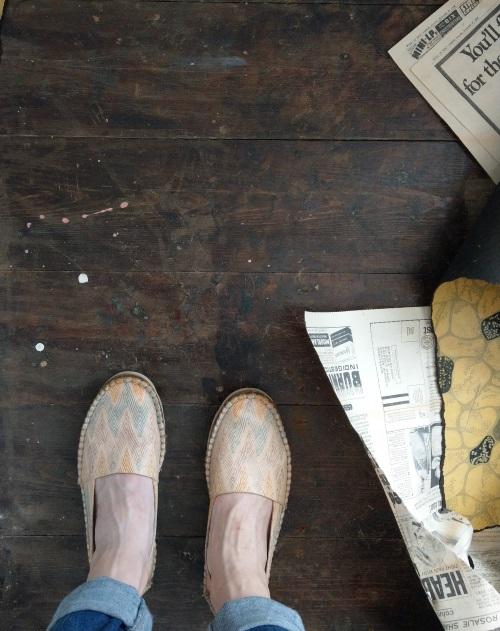 After all the excitement of making decisions and uncovering hidden gems (all the original doors had been boarded up upstairs, plus some perfect floorboards in the living room), we're now at the fairly boring stage of redoing the plumbing and electrics, putting in new flooring in the kitchen and dining room (by which I mean the actual floors. Not the pretty wood/tile stuff you put on top of those), re-plastering the walls and ceilings and general things which are both quite slow and don't require to me think about all the fun design stuff. So I probably won't be back with an update for another six weeks or so, by which time we will (hopefully) have a bathroom, a bedroom and a living room, and will be getting ready to move in (and live in a building site for many more weeks to come!)